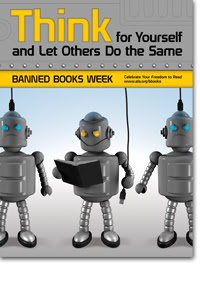 I'm guessing most of you kidlit-friendly and book-bloggy readers out there already know that we're in the middle of 2010's Banned Books Week. (September 25 to October 2.) Did you know that an estimated 70 to 80 percent of the cases in which books are challenged at libraries and schools are never reported to the American Library Association? That surprised me for some reason. And then it didn't. Hard to know, of course, whether those challenges turned into bans or were summarily (or at least eventually) dismissed.

I haven't decided which banned to read in celebration of my intellectual freedom, but I'll definitely pick something tomorrow evening — 'cause that's when I plan to start reading it!

Meanwhile, I thought I'd share a roundup of the most interesting BBW-inspired links I've come across.
Enjoy!
Posted by Lisa at 4:32 PM

I just re-read Fahrenheit 451 for the first time since, um, the early '80s. It's not really about censorship (which is the Mass Media take, of course), but it *is* a reminder of the psychological and societal value of the information stored in books.

It is also very, very spooky how accurate Bradbury was in predicting our entertainment-obsessed and dumbed-down culture. Well worth revisiting if you haven't read it in a while, but pack a hanky.

Hey, Lisa! :) Thanks for stopping by! So happy to meet you. Best of everything as you begin TAW!