SCBWI's 10th annual NYC conference is under way. I've attended once in the past and have always wanted to go back. It's a great weekend. Full of useful information, packed with interesting peers, and buzzing with a wonderful positive energy. Plus, you're just steps — or a quick cab ride — from Broadway, jazz clubs, and too many restaurants.

I couldn't go this year. I am, however, enjoying the conference blog right now. CWIM's Alice Pope is blogging from the floor, keeping everyone updated on presentations and other happenings. It's perfect! I'm sitting here in my West Coast living room still drinking my morning coffee, and after just 20 minutes of reading I'm all caught up on the goings-on. It's not the same as being there. But it's still pretty cool. The best part is that I can go about my Saturday and then check back in later to see what I've missed. 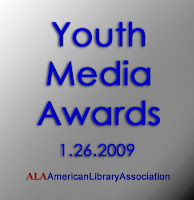 Has the weekend started yet? No? Dang.

While you wait, enjoy these articles about a few of this week's big kid-lit award winners:

The 2009 ALA Midwinter Conference is in full swing in Denver right now, and this morning was IT for ALA's Youth Media Awards, such as the Newbery, Caldecott, Geisel, and more.

Some of this year's distinguished honorees include:

Newbery Honor Books
The Underneath by Kathi Appelt

The Surrender Tree: Poems of Cuba's Struggle for Freedom by Margarita Engle

Caldecott Medal
Beth Krommes, illustrator of The House in the Night by Susan Marie Swanson

How I Learned Geography by Uri Shulevitz

A River of Words: The Story of William Carlos Williams, illustrated by Melissa Sweet, written by Jen Bryant

Coretta Scott King Author Award
Kadir Nelson for We Are the Ship: The Story of Negro League Baseball

Becoming Billie Holiday by Carole Boston Weatherford, illustrated by Floyd Cooper **This was one of my absolute favorites this year. Stunning writing, stunning art.**

Coretta Scott King Illustrator Honor Books
We Are the Ship: The Story of Negro League Baseball written and illustrated by Kadir Nelson

Before John Was a Jazz Giant written by Carole Boston Weatherford, illustrated by Sean Qualls

The Moon Over Star by Dianna Hutts Aston, illustrated by Jerry Pinkney

Theodor Suess Geisel Award
Are You Ready to Play Outside? by Mo Willems

Congratulations to all the honorees! For a full list of the 2009 awards, check the ALA site for updates later today.

Fellow writer/blogger Darcy Pattison has put up a poll to see how interested writer-types have found today's news. Did you watch the webcast or track the awards on Facebook (that's what I did)? Or are you reading about the awards here? (Lucky you if you were in the room — I've witnessed the awards announcements with my own eyeballs once in the past, and that was exciting!) Click on over to Darcy's blog to take the poll.

Also, just for fun, here's a fresh AP piece with author Neil Gaiman's reaction to winning the Newbery this morning.
Posted by Lisa at 9:53 AM 3 comments:

Writing six books in six weeks sounds insane, doesn't it? But I'm doing it. The books are short, about 1,000 words each (illustrated nonfiction). The schedule is tight but doable.

Starting next week, I have one title due each of six Tuesdays in a row. This project came along just as I was starting to plan a little vacation that I need but wasn't quite ready for, so for me the timing was right and the distraction factor (from what has created the need for a break) was perfect. Really, it's no fun to vacate if you're not entirely up for it.

A to the Q: Children's Book Markets Loosely Defined

A to the Q is an ongoing series of posts in which I answer questions I've received from blog readers, workshop students, and others about writing and navigating the waters of children's publishing. My aim is to share what I know and spark your search for even more information.

Q: Help! Can you define the different children's book markets?

Great question — I assume you're talking about the children's trade book, mass, and educational markets? Here's what I think I know about distinguishing among the three!

Trade books:
These books are sold primarily to bookstores, distributors, schools, and libraries. They're considered more "literary" in nature, and thus are the more expensive and widely reviewed titles. They typically come out first as high-quality jacketed hardcovers before being released as high-quality paperbacks, but these days some trade books do come out in paperback only.

Current bestselling authors in trade books include Stephanie Meyer, Kate DiCamillo, Cornelia Funke, and any celebrity-picture-book-authors-of-the-moment. Trade books generally stay in print for a minimum of two years (unless that has changed with the market downturn). Most trade-book authors are paid an advance against the royalties from future sales, and they hope, of course, that their books stay in print and earn them royalties indefinitely.

Series such as Magic Tree House are sold through mass-market outlets. A mass-market publisher may release hundreds of titles per year, while a trade publisher will release a much smaller list of, say, 25–50. Very popular trade books often get distributed later as mass-market titles.

Note that trade and mass-market book publishers look for the same basic things: fresh, original, well-written fiction and nonfiction for all ages from infant to young adult. But each publisher has its own budget, marketing strategy, and niche to fill. It would be impossible to get more specific about what each market wants to see from writers because the next step in delineating that is to narrow it down to what each individual publisher wants. (That's where your own market research comes in!)

Books for the school-and-library/educational market:
Books in all categories can potentially be sold to this market. Trade books are often offered to this market in both their original paperback versions and in retooled versions featuring reinforced bindings. A reinforced binding is a sturdier, pricier version of a jacketless hardcover. Distributors sell single copies and classroom sets of single titles or themed sets. Volume purchases by libraries, schools, school districts, and even entire states receive special discounts.

Some school-and-library publishers specialize in either fiction or nonfiction, and most specialize further by sticking to general topic areas, such as history and biography, issue-based explorations, myths and folktales, special-interest picture books, and so on. Writers are typically paid flat rates for these projects, but some publishers do pay advances against royalties. Also, some school-and-library/educational publishers occasionally — or always — hire book packagers (also called development houses) to hire and work with writers. When your client is the packager and not the publisher, you can expect lower pay rates and tighter schedules.

I hope I've answered your question. As a companion piece, you might also be interested in this post about children's writing genres.
Posted by Lisa at 11:27 AM 2 comments:

Email ThisBlogThis!Share to TwitterShare to FacebookShare to Pinterest
Labels: Business of Writing, I Get Questions

I just looked at the list of writing resolutions I posted for 2008. It is hysterical. I accomplished a pathetic 3/10 of those puppies (numbers 1, 3, and 4, in case someone cares). As a time saver for 2009, I think I'll just re-up on the 9 still-relevant items from that list (number 9 no longer applies). Why not!

I briefly toyed with adding a new tenth item — to blog here more frequently — but there's really no need. The time- and life-sapping forces that dominated my 2008 are beginning to fade into the ether. So I feel sure that I'll do more blogging as a natural matter of course. This post alone is evidence! And besides, it seems plausible that I won't even look at the list again until 2010 rolls around . . .

Happy New Year!
Posted by Lisa at 4:09 PM No comments: